Remembering Our Fallen memorializes more than 5,000 who have lost their lives since 9-11.

HUTCHINSON — A traveling memorial dedicated to the thousands of men and women who died while fighting the War on Terror is coming to the Kansas State Fair Sept. 11-20.

Dish Network is the presenting sponsor of the photographic war exhibit, which honors more than 5,000 of the nation’s military personnel who have lost their lives since Sept. 11, 2001. Several other Kansas businesses have also partnered to help bring the tribute to the Fair.

The 32 towers include both military and personal photos and will be displayed at Lake Talbott. About 80 Kansans who died in Iraq and Afghanistan are memorialized on the 10-foot towers.

With all four sons volunteering to serve their country, Bill and Evonne Williams of Omaha, Nebraska, created Remembering our Fallen in 2010 as homage to Nebraska’s service men and women. In 2017, the couple unveiled a nationally focused traveling exhibit at the Lincoln Memorial in Washington.

With the Fair kicking off on Sept. 11, officials wanted a way to pay tribute to the innumerable sacrifices made by the nation’s military and their families, said Fair General Manager Robin Jennison.

“Remembering Our Fallen will provide us a place at this year’s Fair to reflect on those losses,” said Jennison. “Also, we think it’s very important for Kansans of all ages to honor those who protect our freedoms and our way of life on a daily basis.”

"DISH honors our heroes today and every day with offers exclusively for active-duty military and veterans," according to DISH. "Never forget that we are the land of the free, because of the brave."

Other partners helping to bring the memorial to the Fair are: Allen Samuels, Elliott Mortuary and Traeger/Home Lumber.

The Kansas State Fair has featured the best of all things Kansas – including its culture, its economy, its people and its communities – since 1913. Located in Hutchinson, it is the state’s single largest event, drawing an average 340,000 people from all 105 counties and several states for 10 days each September. This year’s fair is Sept. 11-20. 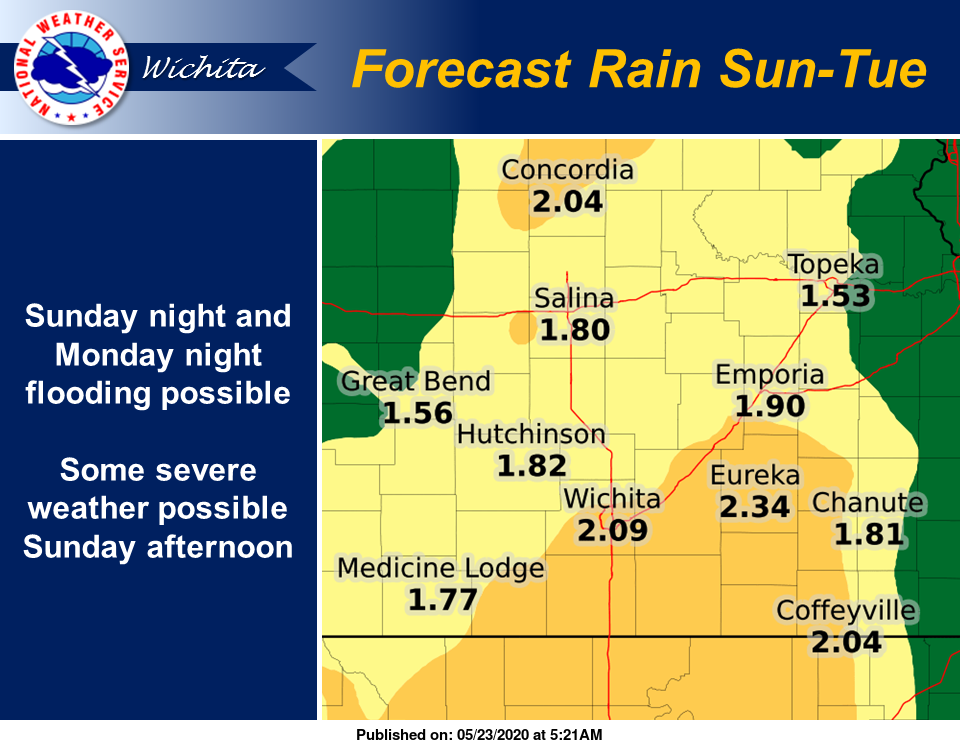 We're off to a warm start to the Memorial Day Weekend holiday, but showers and thunderstorms are expected to dominate Sunday through Tuesday.

According to the National Weather Service (NWS) in Wichita, mostly sunny skies and above normal temperatures are expected today as highs top out in the mid to upper 80s.

While there is a 30 percent chance of showers and thunderstorms Saturday night, it is a a slow moving front expected to come through Sunday through Tuesday that will greatly impact stormy weather in our area, NWS noted.

Sunday night and Monday night look to have the best chances for flooding rains, according to NWS. Some severe weather will be possible Sunday afternoon and evening, the weather service reported.