In 1814, a third version of Beethoven's only opera, "Fidelio," had its world premiere in Vienna.

In 1915, Italy declared war on Austria-Hungary during World War I.

In 1934, bank robbers Clyde Barrow and Bonnie Parker were shot to death in a police ambush in Bienville Parish, Louisiana.

In 1939, the Navy submarine USS Squalus sank during a test dive off the New England coast. Thirty-two crew members and one civilian were rescued, but 26 others died; the sub was salvaged and re-commissioned the USS Sailfish.

In 1944, during World War II, Allied forces bogged down in Anzio began a major breakout offensive.

In 1945, Nazi official Heinrich Himmler committed suicide by biting into a cyanide capsule while in British custody in Luneburg, Germany.

In 1967, Egypt closed the Straits of Tiran to Israeli shipping, an action which helped precipitate war between Israel and its Arab neighbors the following month.

In 1977, Moluccan extremists seized a train and a primary school in the Netherlands; the hostage drama ended June 11 as Dutch marines stormed the train, resulting in the deaths of six out of nine hijackers and two hostages, while the school siege ended peacefully.

In 1984, "Indiana Jones and the Temple of Doom," starring Harrison Ford, was released by Paramount Pictures.

In 2007, President George W. Bush, speaking at the U.S. Coast Guard commencement, portrayed the Iraq war as a battle between the U.S. and al-Qaida and said Osama bin Laden was setting up a terrorist cell in Iraq to strike targets in America.

Ten years ago: In a new al-Qaida video, U.S.-born cleric Anwar al-Awlaki (who would die in a U.S. drone attack in September 2011) advocated the killing of American civilians, accusing the U.S. of intentionally killing a million Muslim civilians in Iraq, Afghanistan and elsewhere. Space shuttle Atlantis undocked from the international space station. The Czech Republic captured the ice hockey world championship, ending Russia's 27-game tournament winning streak with a 2-1 victory in Cologne, Germany. The final episode of the supernatural castaway drama "Lost" aired on ABC after six seasons.

Five years ago: Cleveland patrolman Michael Brelo, who fired down through the windshield of a suspect's car at the end of a 137-shot barrage that left the two unarmed black occupants dead, was acquitted of criminal charges by a judge who said he could not determine the officer alone fired the fatal shots. Salvadorans rejoiced as slain Roman Catholic Archbishop Oscar Romero, slain by an assassin in 1980, was declared a martyr for the faith. John Forbes Nash Jr., 86, a mathematical genius whose struggle with schizophrenia was chronicled in the 2001 movie "A Beautiful Mind," and his wife, Alicia Nash, 82, were killed in a car crash on the New Jersey Turnpike. Actress-comedian Anne Meara, 85, whose comic work with husband Jerry Stiller helped launch a 60-year career in film and TV, died in New York. Jazz trumpeter Marcus Belgrave, 78, died in Ann Arbor, Michigan.

One year ago: The U.S. filed new charges against WikiLeaks founder Julian Assange, accusing him of violating the Espionage Act by publishing secret documents containing the names of confidential military and diplomatic sources. A day after President Donald Trump stormed out of a White House meeting with congressional leaders, House Speaker Nancy Pelosi suggested that Trump's family or staff should have "an intervention for the good of the country," and that Trump might want to "take a leave of absence." Trump described Pelosi as "a mess," and said she had been "all crazy" at the meeting. John Walker Lindh, the Californian who had taken up arms for the Taliban and had been captured by U.S. forces in Afghanistan in 2001, was released from prison after more than 17 years, but still faced tight restrictions amid fears that he still held radical views. Facebook said it had removed more than 3 billion fake accounts between October and March, twice as many as in the previous six months.

Thought for Today: "Sometimes you have to be silent in order to be heard." — Swiss proverb. 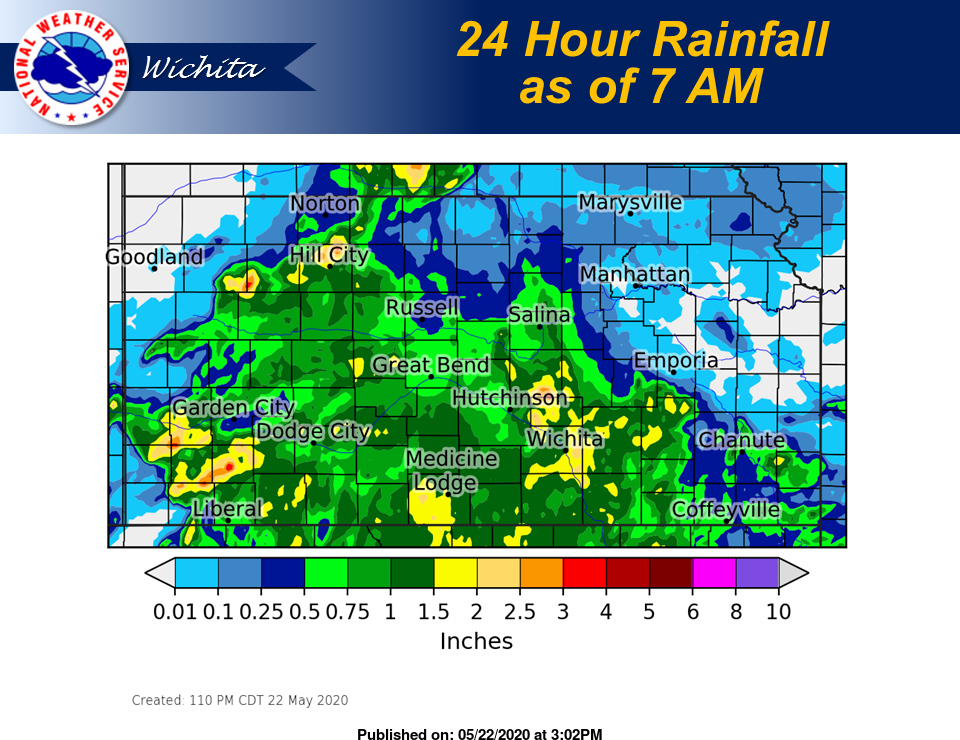 Here's a look at the 24-hour rainfall totals as of 7 a.m. Friday from the National Weather Service in Wichita: