The Liberty plays in the spring and summer with home game at Tony’s Pizza Events Center. They were CIF runners-up a year ago, finishing with a 9-5 record.

Bradford, Feauto and Broomfield will be among 35 athletes in the Liberty’s preseason camp that opens March 2. The roster will be trimmed to 25 before the season opener against Amarillo on March 21 at TPEC.

“This is not a publicity stunt,” Liberty General Manager Francis Flax said. “The intent is to win football games and generate fan interest. With that in mind, they have to prove themselves and make the team.

“They’ve been great for Kansas Wesleyan, the city of Salina and the entire state. What they accomplished is tremendous. They’re great football players.”

KWU Coach Myers Hendrickson is glad the group will remain close by.

“I’m really excited for those three to continue to play the great game of football and also do it in Salina,” he said. “They’re outstanding individuals, outstanding football players – I know we’ve got other players as well that are very excited about their future and opportunity to keep playing.

“But to have three right here in Salina that we can continue to watch – the Coyote football family, the campus community, the Salina community – is tremendous. Selfishly, myself, I’ll get to go be a fan and watch these guys play, which I’m really looking forward to.”

Feauto was named All-America by the Associated Press and American Football Coaches Association/NAIA following the 2019 season. He threw for 7,362 yards and 90 touchdowns, and rushed for 900 yards and nine TDs during his two seasons as the Coyotes compiled 25-2 record.

Feauto’s ability to make plays with his arm and feet will serve him well in the professional ranks, according to third-year Liberty Coach Heron O’Neal, who has a 19-9 record in two seasons.

“His mobility, how he can improvise, the numbers he put up, how he breaks down the defense, how dynamic he is … he’s the best player at that level,” O’Neal said. “When Coach (George) Martinez brought him in you could just see the confidence he exudes. It became a no-brainer of why he was able to lead those guys. He has the ‘it’ factor.”

“Same type of stature, a shorter kid who can throw from many different platforms,” he said. “He’ll stand in there and take the hit, but he’ll also get out of the pocket and is dynamic enough he can make things happen with his feet as well.”

Bradford was the top vote getter in the NAIA for the Cliff Harris Award two years in a row. The award recognizes the top defensive players at the small college level.

Bradford also a two-time AP and AFCA/NAIA All-American after leading the NAIA with 43 combined sacks in 2018 and ’19. He also had a combined 63 tackles for loss totaling 347 yards.

“You look at his film and he has supreme quickness on the edge and a burst that’s second to none,” O’Neal said. “He can counter his size (5-10, 223 pounds) with how strong he is and can leverage a bigger 6-4 kid. They have to come down to his level and when they come down to his level they’re not strong enough to deal with everything that he brings to the table.”

“He had 20 tackles for losses each year and lets you know he also does it in the run game,” he said.

O’Neal said Bradford will play end and some linebacker.

“We’ll start him off at end and let him get some linebacker reps, too. I think he has the capability of doing both,” he said.

Broomfield was an honorable mention All-Kansas Conference choice this fall. He had 69 tackles and five interceptions during his two seasons with the Coyotes. He returned an interception 99 yards for a touchdown against Friends in 2018.

“He can play corner(back) and safety,” O’Neal said. “A lot of guys can only one or the other. In indoor football you’ve got to have that versatility to have a chance to be successful, especially in the defense that I run.

“You have to have that skill set of quick in space as well as that long range speed that he has and the ball skills he has. He’s a playmaker back there.”

“You never dream of having something like that in your own back yard,” said Martinez, who watched the trio play for two seasons. “I was impressed with their work ethic, their coachability and their eagerness to learn each and every day.”

The Liberty lost to Duke City 35-29 in the CIF championship game last season. 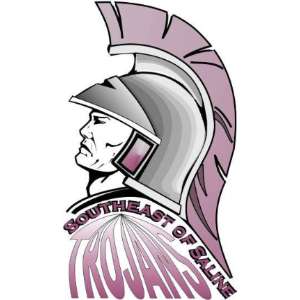 The Southeast of Saline basketball teams travel to Beloit tonight. If you can't make it to the games, you can catch the action on KINA (910 AM and 107.5 FM).