The Tigers struggled early and fell down by 11 through the first eight minutes of the game. However, they rallied back with a 12-0 run to take the lead for the first time at 19-18 with 8:37 remaining before the half. The lead grew to seven twice before the Tigers led by six at the break, 38-32.

The Tiger lead grew to eight twice early in the second half, but the Tigers could not push the lead any higher in the second half. Newman used a 10-2 run to take the lead back from the Tigers at the 10:37 mark, 55-54. They would lead once more and tie the game three times before a 6-1 run between 6:02 and 2:47 on the clock gave the Tigers enough breathing room with a 69-64 lead. Nyjee Wright capped the run with a 3-point field goal to push a two-point lead to five.

Up just one with a minute remaining in the game, Wright hit another big 3-point field goal to push the Tiger advantage back to four. Wright kept the Jets at arm's length by hitting all four of his free-throw attempts inside 30 seconds remaining. He finished with a career-high 26 points, while dishing out a team-high four assists. He was 8-of-10 from the field overall, including a 4-of-5 effort beyond the 3-point line, and 6-of-6 at the line.

Aaron Nicholson (15), Devin Davis (13), and Jared Vitztum (12) all reached double figures in scoring as well. Davis was just one rebound shy of a double-double with a team-high nine.

Marshawn Blackmon led the Jets with 21 points and was one rebound shy of a double-double. Teammate Juwan Davenport did record a double-double with 10 points and 12 rebounds. David Javorsky had 15 points off the bench for the Jets.

The Tigers look for a perfect four-game home stand on Saturday when they play host to Central Oklahoma. Game time is at 4 p.m., which follows the women's contest at 2 p.m. 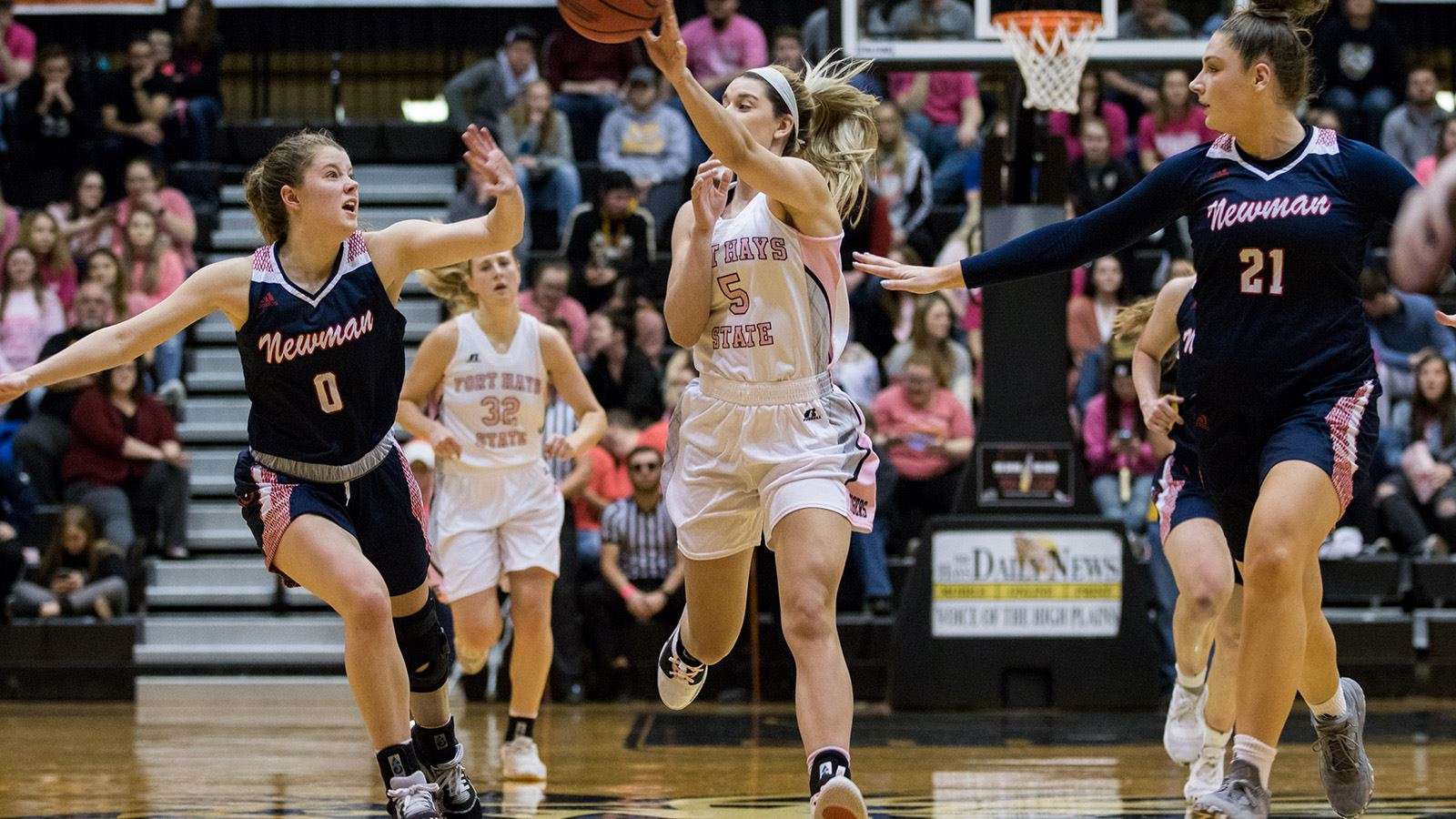 HAYS -- The 23rd-ranked Fort Hays State women's basketball team pulled in front of Newman with a dominating second quarter and held on after halftime to defeat the Jets on Thursday, 78-58. The Tigers (17-4, 8-4 MIAA) hit 75 percent from the floor in the second quarter while holding Newman (9-14, 4-10 MIAA) to just three field goals, turning a six-point deficit into a seven-point halftime lead.

Fort Hays State struggled from the floor in the opening 10 minutes, knocking down just four shots in the first quarter. Newman senior Kaitlyn Potter pushed the Jets in front with a trio of 3-pointers in opening frame, outscoring the Tigers herself until Whitney Randall buried a 3-pointer of her own in the final minute of the quarter.

After the lead changed hands four times in the first quarter, the teams jostled for the lead seven times in the second stanza. The Tigers tied things up at 20-20 after opening the quarter on a 9-3 run sparked by an and-one from Cydney Bergmann.

The teams traded points for the next four minutes before Taylor Rolfs gave the Tigers the lead for good with 3:03 to play before halftime, prompting a nine-point run. Randall scored on the next two trips down the floor before Jaden Hobbs buried a 3-pointer to push the lead to 35-27. Newman broke through with less than a minute to go with a traditional 3-point play, but Randall added two more points to her 13-point first half with another jumper with 15 seconds to go, giving the Tigers a 37-30 lead at the break.

Potter opened the second half with another 3-pointer to help the Jets close within four, 37-33, but the Tigers responded with seven-straight points to go back up by double digits. Kacey Kennett bookended the run with a layup and a 3-pointer, putting the Tigers in front 44-33 less than three minutes into the second half.

Newman would stay within striking distance over the next 10 minutes, trading points with the Tigers to keep the margin between eight and 12 points, but the Tiger defense took over down the stretch to seal the win. FHSU held the Jets scoreless for nearly six minutes in the fourth quarter, forcing three turnovers and eight-straight misses.

The Tigers took advantage on the other end of the floor with a 13-0 run after Rolfs buried back-to-back 3-pointers midway through the final frame. Bergmann added a layup after a nice pass from Rolfs on the next possession before Allison McFarren drilled another 3-pointer for the Tigers, stretching the lead to 20 points with 3:07 on the clock, 74-54.

After hitting just 28.8 percent from the floor in the first quarter, the Tigers turned things around to finish the game shooting 32-of-65 from the floor (49.2 percent). FHSU hit eight 3-pointers, shooting 36.4 percent from behind the arc (8-of-22). The Tiger defense limited Newman to a 38.8 shooting percentage (19-of-49).

The Tigers had five players score in double figures for the second time this season, led by Rolfs' 17-point outing. The senior knocked down 3-of-5 from behind the arc, adding six rebounds, four assists and two steals. Randall added 13 points, all in the first half. Bergmann added 11 points on 4-of-4 shooting from the floor and 3-of-3 shooting from the line. Hobbs and Belle Barbieri added 10 points each, with Barbieri grabbing a team-high seven rebounds and Hobbs dishing out a team-best six assists.

The Tigers will look to keep things rolling on Saturday when they host Central Oklahoma in another crucial MIAA contest. First tip is set for 2 p.m. inside Gross Memorial Coliseum.