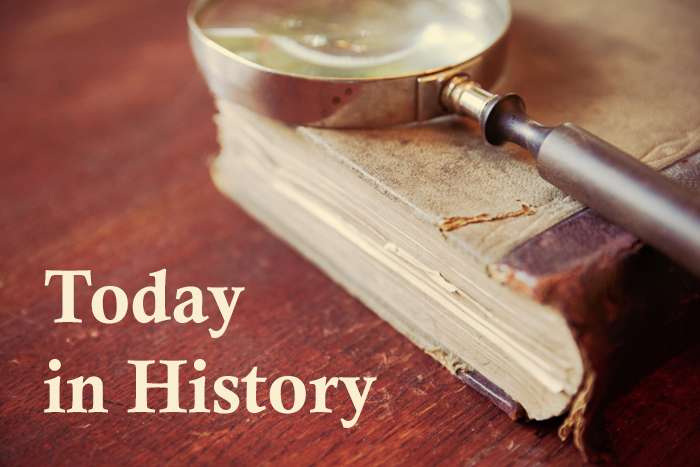 In 1608, English poet John Milton was born in London.

In 1911, an explosion inside the Cross Mountain coal mine near Briceville, Tennessee, killed 84 workers. (Five were rescued.)

In 1958, the anti-communist John Birch Society was formed in Indianapolis.

In 1960, the Domino's Pizza chain had its beginnings as brothers Tom and James Monaghan started operating a pizzeria in Ypsilanti, Mich.

In 1962, the Petrified Forest in Arizona was designated a national park.

In 1984, the five-day-old hijacking of a Kuwaiti jetliner that claimed the lives of two Americans ended as Iranian security men seized control of the plane, which was parked at Tehran airport.

In 1987, the first Palestinian intefadeh, or uprising, began as riots broke out in Gaza and spread to the West Bank, triggering a strong Israeli response.

In 2000, the U-S Supreme Court ordered a temporary halt in the Florida vote count on which Al Gore pinned his best hopes of winning the White House.

In 2013, scientists revealed that NASA's Curiosity rover had uncovered signs of an ancient freshwater lake on Mars.

Ten years ago: Five young American Muslims were arrested in Pakistan over possible links to terrorism. Iran claimed that a newly-built U.N. station to detect nuclear explosions was built near its border to give the West a post to spy on the country. Former Costa Rican President Rodrigo Carazo Odio, 82, died in San Juan. Actor Gene Barry, 90, died in Woodland Hills, California.

Five years ago: U.S. Senate investigators concluded the United States had brutalized scores of terror suspects with interrogation tactics that turned secret CIA prisons into chambers of suffering and did nothing to make Americans safer after the Sept. 11, 2001 attacks. Britain's Prince William and his wife, Kate, paid a solemn, rain-drenched visit to the National Sept. 11 Memorial and Museum as they wrapped up their first visit to New York. Mary Ann Mobley Collins, 77, a former Miss America and actress, died in Beverly Hills, California.

One year ago: A massive storm brought snow, sleet and freezing rain across a wide swath of the South, cutting power to hundreds of thousands. Melvin Dummar, the former Utah gas station owner who claimed that billionaire Howard Hughes had left him $156 million for rescuing him on a desert road, died in Nevada at the age of 74; courts had determined that he lied, and that the will in which he was named as a beneficiary was a fake.