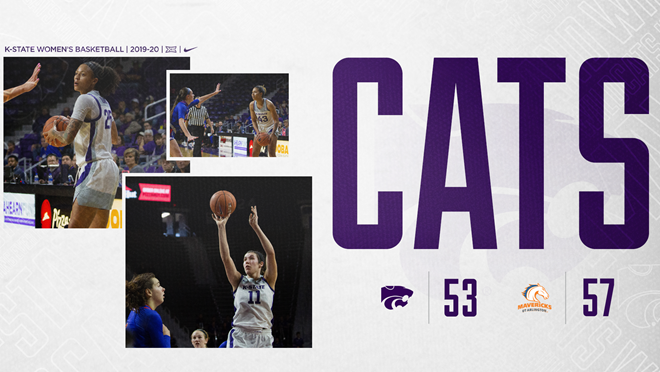 The Wildcats narrowed the game to three, 54-51, with 42 seconds to play with the assistance of an 15-4 run which was highlighted by seven points from Christianna Carr. The Wildcats pulled within three after two free throws from Angela Harris.

The Lady Mavericks received a clutch jumper from Terryn Milton with 12 seconds on the clock to give them a five-point lead, 56-51. Carr converted a driving layup after a timeout to bring K-State back to within three, 56-53. UT Arlington was able to close the game with a free throw by Claire Chastain with seven seconds to play.

In the first half, UT Arlington used a decisive 16-4 run in the second quarter to construct a 12-point lead at the half, 32-20. The 20 first half points by the Wildcats were the fewest since scoring 16 at West Virginia on January 26, 2019.

Despite the absences, the Wildcats had at least three players reach double figures for the fourth time this season, led by senior forward Peyton Williams. Williams carded her third double-double in as many games played for her this season with 16 points and 18 rebounds.

With her 18 rebounds, Williams moved into 14th on the K-State career rebounds list with 709 to her name. She is the 15th player in program history to haul in 700 or more career rebounds.

With her 16 points, the All-America candidate from Topeka, Kansas, moved into 28th on the K-State career scoring list with 1,163 points.

Joining Williams in double figures were Carr and Harris with 15 and 10 points, respectively. Carr was 3-of-6 from beyond the arc.

The Wildcats will leave the friendly confines of Bramlage Coliseum for the first time on November 29 and 30 for the 17th annual Junkanoo Jam in Bimini, Bahamas. Kansas State, Memphis, LSU and Michigan State make up the Bimini Division of the event.

All games will be streamed live at FloHoops.com. To access the live event coverage and replays of the Junkanoo Jam, users must sign up to become FloPRO subscribers on FloHoops.com.

The games will also be available for free at kstatesports.com.