UPDATE: What Kansans need to know about the COVID-19 coronavirus

The new coronavirus is spreading quickly around the world, including across Kansas, and setting off a range of responses. The Kansas News Service is boiling down key developments in the state and updating the status regularly here.

81 cases, including two from out of state (see map for counties)

NOTE: These figures only include cases confirmed with lab tests and do not represent the real, unknown total. Community transmission of the disease has been confirmed in Johnson County, which has also scaled back testing.

Douglas, Leavenworth, Johnson and Wyandotte counties (and neighboring Jackson, Clay and Platte counties in Missouri) are ordering people to stay home unless carrying out essential activities (such as grocery shopping or going to work) starting Tuesday, March 24, and lasting for 30 days.

People in other counties don't have stay-at-home orders but are still under Gov. Laura Kelly's executive order prohibiting gatherings of more than 10 people.

For the whole state: The Kansas Department of Health and Environment (KDHE) is now mandating home quarantine for 14 days if you've traveled to the places listed below. If you come down with symptoms (such as a fever of 100.4 degrees or higher, coughing or shortness of breath) during those 14 days, contact your health care provider and explain your potential COVID-19 exposure.

Kansas health secretary Lee Norman received 500 kits before the week of March 24, which he said would be enough for the week. The state is also working with hospitals in the KC metro and Wichita to set up in-house testing at their facilities.

Johnson County: As of March 20, KDHE said the county is the only in the state with confirmed community transmission. The state and county health departments have decided to scale back testing there because it is assumed that people in that area with COVID-19 symptoms do in fact have COVID-19. They should stay home and care for themselves. People in Johnson County who get sick enough to be hospitalized will be tested to help doctors determine their treatment.

KANSAS HAS DECLARED A STATE OF EMERGENCY. WHAT DOES THAT MEAN?

It gives the state government more power to marshal resources and triggers the state's response plan. The state Legislature has extended Kelly's declaration through May (and can extend it), with the aim of giving her the ability to make certain decisions when lawmakers aren’t in session.

On March 22, Kelly eased state rules to expand the use of telemedicine, to temporarily license more health workers and to allow heavier trucks on Kansas highways hauling relief supplies. On March 23, she ordered a ban on evictions if a tenant was unable to pay because of the coronavirus crisis. And she extended the income tax filing deadline to July 15, in line with a delay for filing federal tax forms.

HOW ARE UNIVERSITIES RESPONDING?

K-State, University of Kansas and Wichita State: All of them will go fully online for the end of the school year. Students at K-State and KU will need special exemptions to remain in dorms.

Gov. Laura Kelly and Kansas Education Commissioner Randy Watson have shut down all K-12 schools, public, private and parochial, for the rest of the 2019-20 school year. They had initially issued a strong recommendation that schools close March 16 through 20.

A Kansas State Department of Education task force has issued guidance to school districts on how to continue some amount of student learning.

WHAT’S BEEN CANCELED OR SUSPENDED?

The governor’s executive order temporarily banning landlords from evicting businesses or residential tenants is effective until May 1. That same order put in a moratorium on any mortgage foreclosures through the same period.

The governor mandated on March 23, through an executive order, that gatherings be restricted to less than 10 people.

Kansas state workers: Access to the Statehouse is limited to official business only, and lawmakers went on break early. Kelly wanted most state employees to stay home for at least two weeks starting March 23.

State prisons: The Kansas Department of Corrections ended visitation at all state facilities, and will “re-evaluate on an ongoing basis.” It urges families to talk to inmates through email, phone calls and video visits.

Electric companies: Evergy, which serves 950,000 customers in Kansas, will not disconnect residential or business services for an unspecified amount of time due to the “unprecedented challenge" of coronavirus that "may result in customers facing unexpected or unusual financial strain.”

Casinos: All four state-owned gaming facilities will close at the end of business on March 17, and remain so until at least March 30.

Public events: Many events and public places around the state have been canceled until at least the end of March.

HOW BAD IS THE VIRUS?&nbsp;

COVID-19 usually causes mild to moderate symptoms, like a fever or cough. Most people with mild symptoms recover in two weeks. More severe cases, found in older adults and people with health issues, can have up to six weeks’ recovery time or can lead to death.

HOW CAN YOU AVOID IT?

FOR MORE INFORMATION ON COVID-19

The Centers for Disease Control and Prevention: https://www.cdc.gov/coronavirus/2019-nCoV/index.html

The Kansas News Service is a collaboration of KCUR, Kansas Public Radio, KMUW and High Plains Public Radio focused on health, the social determinants of health and their connection to public policy. 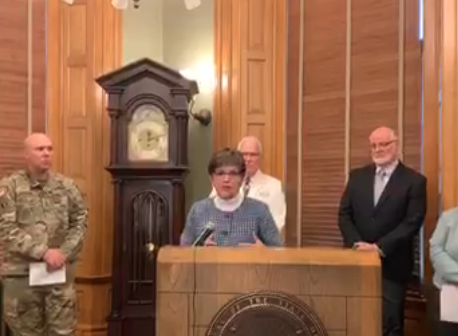 During a Thursday evening news conference, Governor Laura Kelly reported that Kansas has the first death due to coronavirus.

The victim was a man in his 70s from Wyandotte County.

Governor Laura Kelly has also issued an emergency declaration for the State of Kansas in response to COVID-19 (coronavirus).  The declaration authorizes the use of state resources and personnel to assist with response and recovery operations in affected counties that meet certain criteria.

"The safety and well-being of Kansans is our priority, first and foremost," Kelly said. "The landscape of COVID-19 is fast-changing. Today is evidence of that."

Tonight, the Kansas Department of Health and Environment (KDHE) announced the first COVID-19 related death in Kansas. A man in his 70s was brought to the hospital and died shortly after arrival. Testing done post-mortem came back positive for COVID-19. He was living in a long-term care facility in Wyandotte County.

"To prevent the spread of COVID-19 to our most vulnerable population, it's important to follow the recommended guidelines of screening and restricting visitors to our long-term care facilities," Department for Children and Families and Department for Aging and Disability Services Secretary Laura Howard said.

"Our state is well prepared," Kelly said. "With this emergency declaration we can activate our response and coordinate fully. This is part of the process and will make access to important resources more accessible. We continue to work closely with our local, state and federal partners to respond to the potential spread of the virus - or any situation that may arise."

COVID-19 can be found at the following sources:

If you have symptoms such as fever, cough or shortness of breath and believe you may have had contact or have had contact with someone with a laboratory confirmed case of COVID-19, stay home and call your healthcare provider.

TOPEKA, Kan. (AP) — Kansas health officials say they have identified three new cases of the coronavirus, making four cases in the state. Mary Beverly, the interim director of the Johnson County Health Department, says the cases are three men between the ages of 35 and 65 who all attended a conference in Florida.

Beverly says the men did not have symptoms until after they returned from the conference and they are not seriously ill. The announcement comes after the University of Kansas, Kansas State University and Emporia State University joined colleges across the country in shifting classes online to mitigate the spread of the virus.

The Kansas Department of Health and Environment (KDHE) is confirming three presumptive-positive cases of COVID-19 in Kansas. The possible cases were identified with testing sent to KDHE’s Kansas Health and Environmental Laboratories (KHEL). KHEL, which is approved by the Centers for Disease Control and Prevention (CDC) to perform COVID-19 testing, found presumptive-positive results. These results will be verified by the CDC lab but will be treated as a positive unless determined otherwise.

The cases are in Johnson County and involve three people who attended the same conference in Florida. It is believed they contracted COVID-19 in Florida.  They were not symptomatic when traveling home and sought care once they began feeling ill. KDHE continues to work with the local health department and CDC to identify and contact people who may have come into contact with the individual while they were infectious and will monitor them for fever and respiratory symptoms. The patients are all males and in isolation. These cases are not connected to the earlier case in Johnson County. No other information will be provided about the patients.

“Right now, there is no community spread,” Dr. Lee Norman, KDHE Secretary, said. “The cases in Kansas are here because of transmission elsewhere. However, Kansans should remain vigilant. It’s important to live your lives, but it’s also important to take basic precautions like exercising good hygiene practices. It is up to each of us to do our part.”

“Kansas is working alongside local and federal public health partners in addressing presumptive positive cases in our state, and the potential spread of the virus,” Governor Laura Kelly said. “It is our highest priority to keep all Kansans healthy and safe. Everyone should continue to practice safe habits such as hand washing and staying home when sick. The KDHE website, www.kdheks.gov, has daily updates and other resources to keep Kansans educated on COVID-19."

People should exercise vigilance when attending large public gatherings, particularly those people over age 60 and those with weakened immune systems or chronic medical conditions. There are mass events guidance documents from the Centers from Disease Control available on KDHE’s website, www.kdheks.gov/coronavirus.

If you have symptoms such as fever, cough or shortness of breath and believe you may have had contact or have had contact with someone with a laboratory confirmed case of COVID-19, stay home and call your healthcare provider.