The Shockers are the fourth seed to the conference's post-season tournament, which starts Thursday in Fort Worth, Texas. Wichita State gets a first-round bye and will play in the quarterfinals Friday against the winner of No. 5 UConn and 12th-seed Tulane.

Martins Igbanu had 20 points for the Golden Hurricane.

Tulsa - which also gets an opening-round bye - heads to the tournament as the No. 3 seed. The Golden Hurricane face the winner between sixth-seeded Memphis and No. 11 seed East Carolina. 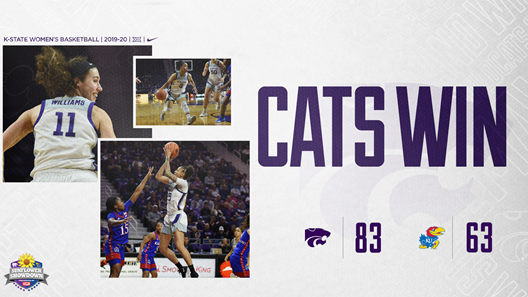 MANHATTAN – K-State sent its three seniors – Jasauen Beard, Angela Harris and Peyton Williams – into the postseason with an 83-63 win over Kansas in the Dillons Sunflower Showdown and Big 12 regular season finale.

K-State secured the 76th win in the series and holds an overall record against Kansas of 76-47. The Wildcats have won 35 of the last 42 meetings in the series with the Jayhawks.

K-State (16-13, 10-8 Big 12) opened the game with a 9-0 run to force a Kansas timeout with 6:36 remaining in the first quarter. The Wildcats’ three seniors all scored during the 9-0 run, as Beard hit a jumper, Williams finished a layup and Angela Harris scored five straight to force the timeout.

The Wildcats used a 14-2 run to open the second quarter to open a 28-16 advantage with 4:35 remaining. Ayoka Lee scored the first seven points for K-State, while Christianna Carr buried her first of two 3-pointers in the first half. Williams then capped the run with a pair of jumpers.

Kansas would close within nine twice, but Carr hit her second 3-pointer and Lee beat the halftime buzzer with a hook shot to send K-State into the locker room with a 37-23 lead. Williams led the Wildcats at the half with 12 points on 6-of-6 shooting, five assists and two rebounds. Lee tallied nine points, 10 rebounds and two blocks.

K-State kept its advantage in double figures in the early portion of the third quarter. Williams scored four points, while Carr knocked down her third 3-pointer of the afternoon to give the Wildcats a 46-31 lead with 4:47 remaining.

K-State would hold Kansas without a point for the final 5:32 of the third quarter, as the Wildcats ended the frame on a 15-0 run to hold a 61-33 lead entering the fourth quarter.

The Wildcats would increase its lead to 30, 69-39, with a layup from Lee with 7:31 remaining. K-State subbed out its seniors individually in the final three minutes. Harris capped her time on the court with a 3-pointer from the wing with 2:12 to play to give the Wildcats an 83-53 lead.

All five starters reached double figures on Sunday. Lee improved her school record for double-doubles in a season with her 19th as she carded 17 points on 5-of-7 shooting and 7-of-7 from the free throw line. She hauled in 14 rebounds and blocked two shots.

Carr notched 12 points on 4-of-6 shooting from beyond the arc to go with four rebounds and two assists.

K-State will now prepare for the 2020 Phillips 66 Big 12 Championships. The Wildcats are slated as the fifth seed and will face Iowa State on Friday at 11 a.m., in Kansas City at Municipal Auditorium. Friday’s game will be broadcast on FSN and will be available on the K-State Sports Network, free at kstatesports.com, and on the K-State Sports app.