CONCORDIA – Looking to start off Kansas Jayhawk Community College Conference East Division play with an upset of the division leader, the Cloud County Community College women's basketball team would push No. 21 nationally ranked Butler Community College to the brink before falling by a final score of 75-70 in Arley Bryant Gymnasium in Concordia, Kansas on Monday.

"We had a great performance from Jasmina Jones off the bench, but unfortunately we didn't have much to go with it as we weren't able to get the production we typically do from our starters" said head coach Brett Erkenbrack in a post-game interview. "We battled and gave ourselves a chance to be in the ball game, but we had some players foul out late and had some breakdowns both offensively and defensively that ultimately was the difference in the game." "We haven't been able to continually make plays for 40 minutes, and when our margin of error is as narrow as it is we have to be able to get five or six players to play well in the same game and not just one or two."

A relatively close opening 10 minutes of play would see the T-Birds match Butler with five points apiece in the opening four-plus minutes of the first quarter before seeing the Grizzlies get a pair of buckets to up 12-7 with 4:12 left in the quarter. CCCC would respond with a Haven Hamilton layup and Jasmina Jones trey to knot things back up at 12 two minutes later and take their first lead of the game on a Kelsie Kelly three with 2:27 left in the period. The final eight points of the quarter would be scored by Butler as the Grizzlies would grab a 20-15 advantage going to the second.

Following a RaVon Nero layup to put Butler up seven at 22-15, Cloud County would start to find their offensive stride with a Jones three that would spark an 11-2 T-Bird run with the first nine points of the run coming off the hands of Jones behind the arc. Holding a 28-26 lead with just under four minutes left in the first half, Cloud County would get two more triples from Jones to open up a 34-26 lead and force a Butler timeout before eventually pushing their lead to double-digits. The CCCC lead would grow to as many as 11 in the final minutes of the second quarter at 39-28 before eventually settling at nine at 41-32.

Both teams would trade a pair of buckets each to start the second half of play, with Cloud County eventually going back up double-digits at 47-36 following a pair of Hamilton free throws with 8:12 left in the third quarter. The T-Bird lead would remain in double-digits for the next four-plus minutes of play with the final double-digit lead coming at 52-42 before Butler would score five of the next seven points to get back within six at 52-46. Free throws would then become the benefit of CCCC as the T-Birds would score four of their final seven points in the quarter from the charity stripe to hang on to a 59-57 lead with just one quarter remaining.

A three from Butler on the opening possession of the fourth quarter would give the Grizzlies their first lead of the second half, but Cloud County would respond with a Kelly three to put the T-Birds back on top 62-60. The Grizzlies would then tie the game at 62-62 before conceding the lead to CCCC one last time on a Hamilton free throw with 6:43 remaining. Butler would then manage to score six of the next eight points to grab a 68-65 lead with all six points for the Grizzlies coming from Nero as the T-Birds would look to keep things close heading down the stretch. The lead for Butler would bounce back and forth between two and four points throughout the final five minutes of play before seeing the Grizzlies ice the game with two free throws to go up five with 13 seconds remaining. Cloud County would get one final bucket, but would not be able to overcome Butler scoring their final five points of the game at the charity stripe to escape with a victory.

A 23-8 advantage for Butler in points off turnovers would erase a 42-35 advantage in rebounds for Cloud County as the T-Birds would commit just 13 turnovers while also getting 16 second-chance points. The Grizzlies would utilize their advantage in size and speed to outscore the T-Birds 32-12 in the paint while also going 16-of-21 (76.2 percent) from the charity stripe.

23 of Jones' game-high 26 points came in the first half as the sophomore would see all seven of her career-high three's come in the first 20 minutes of action. Hamilton would score nine points and grab seven rebounds while LaKya Leslie had a team-high eight rebounds and scored seven points in the defeat.

Cloud County will play each of their next two games on the road, beginning Wednesday with a 5:30 p.m. contest at Coffeyville Community College. The Red Ravens were 73-60 road winners at Cowley Community College to move to 16-3 overall and 6-3 in the KJCCC Monday night. 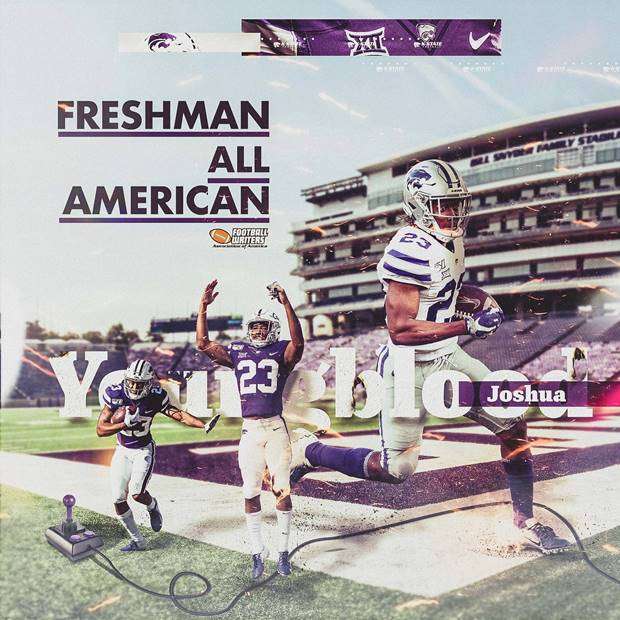 MANHATTAN – Kansas State kick returner Joshua Youngblood received his second honor from the Football Writers Association of America (FWAA) and sixth overall All-America accolade as he was named a Freshman All-American by the organization on Monday.

The freshman was part of an overall kickoff-return unit that led the nation in both average (29.50) touchdowns (4). The unit’s average tied for the 14th best mark in NCAA history and set a new school and Big 12 record.

A product of Tampa, Florida, who was named the Big 12 Special Teams Player of the Year, Youngblood led the country with three kickoff-return touchdowns during the regular season. His three scores rank third in school history for a season and fourth in a career, while he ranks third in Big 12 history for a season and already tied for seventh in a career.

Youngblood held a Big 12-leading 35.9-yard kickoff-return average, which would rank first in the nation and broke both the school and conference records if he had two more attempts to meet the NCAA required minimum.