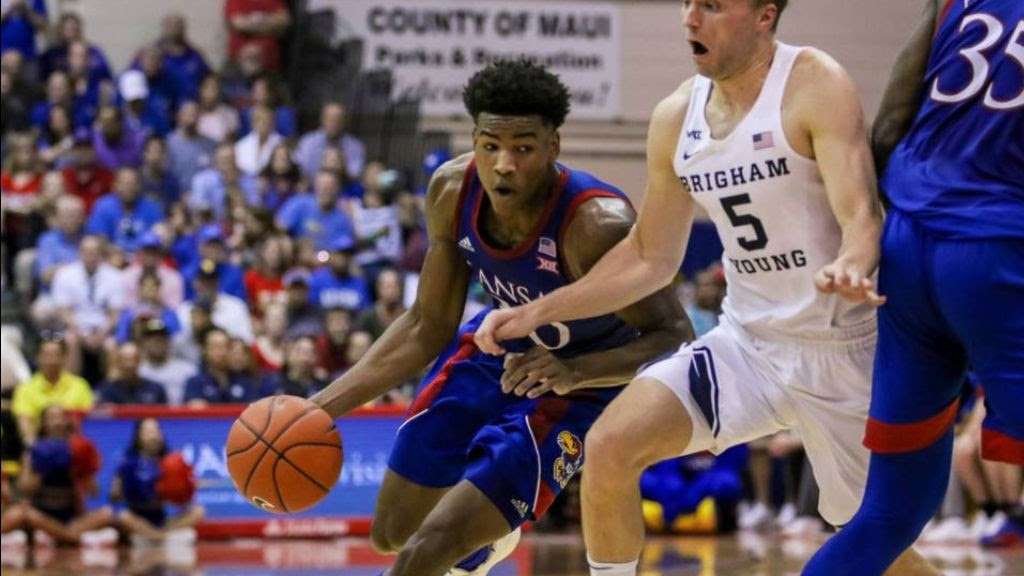 The Jayhawks defeated BYU to advance to the championship game. Photo courtesy kuathletics.com

LAHAINA, Hawaii - No. 4/5 Kansas (5-1) is set to take on the Dayton Flyers in the Maui Invitational championship game on Wednesday.

The Jayhawks, looking for their third Maui Invitational title, will tip-off inside the Lahaina Civic Center at 4 p.m. (CT) on ESPN. Dan Shulman (play-by-play) and Jay Bilas (analyst) will call the action.

Kansas is participating in its seventh Maui Jim Maui Invitational and has a combined record of 17-6 in the event. The Jayhawks are 3-0 mark in campus round games and a 14-6 record in Maui.

KU will be playing in its third-straight Maui Invitational title game and its fourth overall when it meets Dayton Wednesday. KU has gone 2-1 in its previous three title game appearances.

Kansas and Dayton are meeting for the third time in men’s basketball with the series tied at 1-1.

KU’s first two opponents in Maui combined for 47 turnovers (Chaminade – 27, BYU – 20, marking the second-most in a two-game span for Jayhawk opponents during the Bill Self era.

Kansas is 3-0 in Allen Fieldhouse this season and has a 24-game homecourt winning streak, which is third-longest nationally behind Tennessee (30) and Gonzaga (27).

KU is ranked No. 4 in the Nov. 25 Associated Press national poll. KU has been ranked in the top-five 340 times overall and 134 times in the Bill Self era.

KU has been ranked in each of the last 204 AP polls dating back to 2008-09. The 204-consecutive weeks in the polls is the longest active streak in the nation. KU holds the same streak in the coaches’ poll at 212.

Kansas head coach Bill Self is 684-212 in his 27th season overall as a head coach. He is four games from being the 30th active coach in the NCAA to have coached in 900 games.

Dayton defeated Georgia in the opening round of the Maui Invitational, 80-61, and Virginia Tech in the semifinals, 89-62. The Flyers average 87.6 points per game and have a plus-21.0 scoring margin. They have scored 80 or more points in all five games this season. Dayton holds a plus-5.4 rebound margin and averages 9.4 3-point field goals made per game and 25.8 3-point attempts. Dayton also averages 19.6 assists, 5.2 steals and 4.0 blocked shots per contest.

Redshirt sophomore forward Obi Toppin lead Dayton is scoring at 24.0 points per game and rebounding at 8.2 boards per contest. He has made eight 3-pointers.

Kansas returns home to host former conference foe Colorado Dec. 7 at 6 p.m. (CT). KU and CU were members of the Big Seven, Big Eight and Big 12 conferences before CU moved to the Pac-12 in 2012.

Colorado is coached by former Kansas forward Tad Boyle who lettered at KU from 1982-85 playing for coaches Ted Owens and Larry Brown.