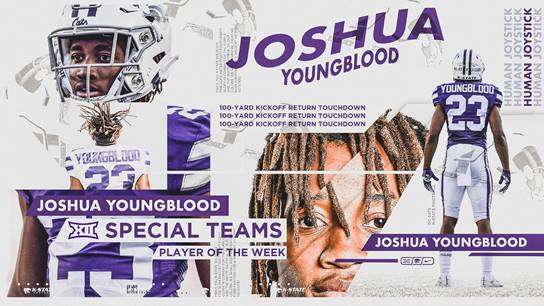 MANHATTAN -- Thanks to his 100-yard kickoff return that helped the Wildcats earn a three-point victory at Texas Tech, Kansas State freshmen wide receiver/returner Joshua Youngblood was named the Big 12 Special Teams Player of the Week, the conference office announced Monday.

Youngblood is the only true freshman in the conference this year to earn offensive, defensive or special teams player of the week honors, while he is the first Wildcat to do so since Tyler Lockett picked up the special teams honor twice in 2011. K-State now has three player of the week accolades this season after safety Denzel Goolsby (defensive) and wide receiver/returner Malik Knowles (special teams) were honored following the Mississippi State games.

A product of Tampa, Fla., Youngblood returned a third-quarter kickoff for a score to push K-State’s lead to 10 over the Red Raiders in a game the Wildcats would go on to win, 30-27. It was Youngblood’s second kickoff-return touchdown this year (98 yards at Texas, which is tied for third in school history for a season and tied for fourth in a career.

Youngblood, who leads the Big 12 with a 35.9-yard kickoff-return average, is one of eight players in the nation to return two kickoffs for touchdowns this year, but the lone freshman to do so. Additionally, he is the first true freshman with two kickoff returns of at least 98 yards since USC’s Adorre’ Jackson also went 98 and 100 yards in 2014.

Kansas State will honor its seniors this Saturday in the regular-season finale against Iowa State inside Bill Snyder Family Stadium. The game kicks at 6 p.m., and will be shown on FS1.

Wildcats fans can bring their friends and family to the Thanksgiving weekend game for just $20 per ticket with the Wildcat 4 Pack. Premium bench lower bowl tickets are $55 and bench tickets are $35. Arrive early to celebrate the seniors as we recognize them and their families pregame. To purchase tickets, visit www.kstatesports.com/tickets, call 1-800-221-CATS or visit the main ticket office inside Bramlage Coliseum.